Before using the complete short path distillation lab equipment for the first time,  it is necessary to understand its working principle and precautions in advance to avoid misoperation during use and cause losses. So, how much do you know about complete short path distillation kit?
Many such as petroleum fumes, chemicals, medicines and natural foods, health products, fatty acids, etc., are often heat-sensitive, viscous and/or have high boiling point materials. To separate these materials from their other components, while maintaining the quality of the product, rectification can only be performed at low or even sub-boiling temperatures, and the thermal decomposition can only be removed in a short period of time. Or polymerization is minimized to eliminate damage to the product. 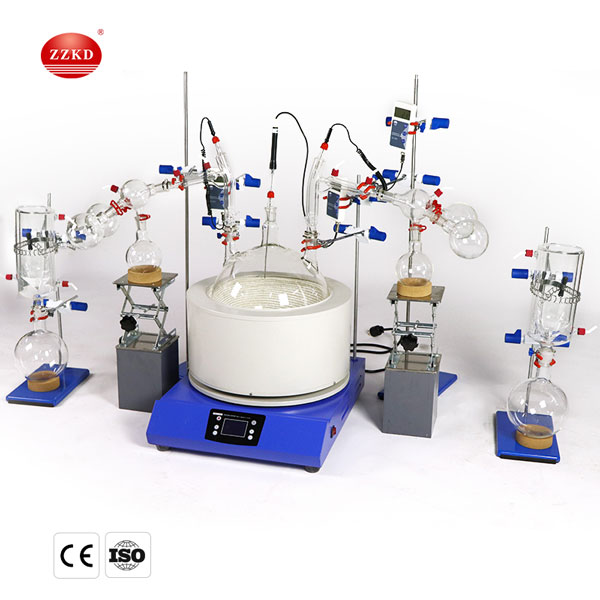 When the operating vacuum is about 500Pa, it can be carried out in a wiped film evaporator or a falling film evaporator. However, there is a problem if the distillation must be operated under medium and high vacuum (eg pressure between 0.001~100Pa). Evaporators must be selected in which the product vapor pressure does not exceed the pressure difference between the passing heating surface and the condensing surface, so evaporators with external condensers are excluded from the steaming process in the medium and high vacuum range. In contrast, type short path evaporators are well suited for this application, and the condenser is built into the evaporator directly opposite where the heated distillation takes place. Therefore, the short-path evaporator is a relatively new separation technology that has not been widely used in industrial production, and can solve a large number of conventional distillation technologies that cannot be solved. The complete short path distillation cbd is divided into three types according to the form of scraper: rolling membrane, sliding scraping membrane, and chain scraping membrane. Different scrapers are selected according to the viscosity and processing properties of the material. 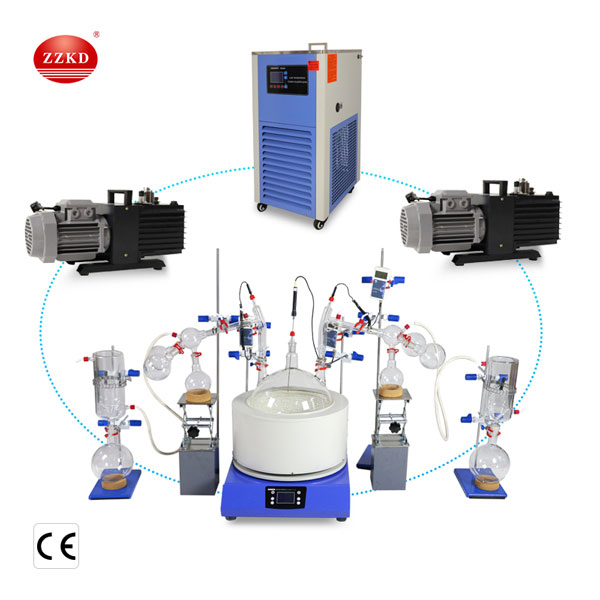 1. Short stay time:
The function of the wiper makes the liquid film stay on the heating surface for a very short time.
2. Low distillation temperature:
Since the condenser is directly opposite the heating surface, the pressure difference is reduced, so it has a very high degree of vacuum, and the material can be distilled at a very low temperature even without reaching the boiling point.
3. Stickies and products containing solids:
The deep immersion of the scraper, relying on a considerable edge, the material film causes a strong shearing and mixing effect, reducing the viscosity of the liquid to be treated, suitable for processing the viscosity to 50Pas, and preventing the heating surface from scaling, especially suitable for Contains solid feed.
4. Very thin distillate level:
The function of the film scraper scrapes the material liquid into a very thin liquid film. more complete separation.
5. High separation ratio:
The precision scraper uses a very thin liquid film that is evenly distributed on the heating surface, resulting in the entire heating surface being wet. This allows the operating unit to have a high boiling separation ratio. This means that more than 90% of the entry in the case is evaporated and the level of constant residual material can be completed. 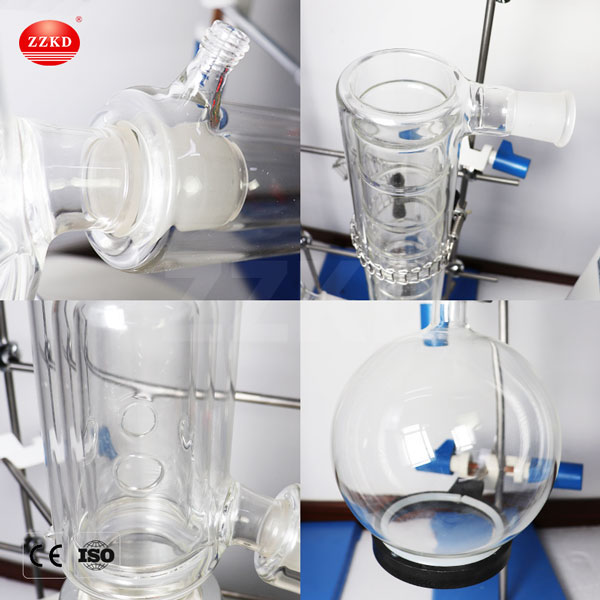 The complete short path distillation kit is beautiful in appearance and easy to operate. It adopts microcomputer for process control and has functions such as automatic distillation control, automatic water addition, automatic water level control, automatic water stop and low water pressure alarm. Its function is that the tap water enters the steam generator after passing through the condenser and the pressure stabilizer to generate continuous and stable steam, distills the digested sample, and calculates the protein content of the sample through titration.
Distillation is a very common and very important pretreatment step in various water quality testing experiments. The traditional distillation equipment has independent heating, distillation, condensation, receiving parts, etc., which is cumbersome to operate and has low efficiency; and due to the lack of distillation end point control, it often leads to distillation failure, affecting work efficiency. Danger. The fully automatic complete short path distillation kit mainly consists of four parts: heating device, distillation device, circulating cooling water device and receiving device. The heating device is equipped with a heating rate intelligent control function; it can realize precise control of heating temperature and heating efficiency; high distillation efficiency, condensation The effect is good; the circulating cooling device is equipped with cooling temperature display and control functions to ensure the cooling effect; the receiving device is equipped with the functions of distillation end point detection and automatic heating stop, realizing intelligent heating control.
Since the acid production rate of the high-grade temperature of the fully automatic complete short path distillation lab equipment is about 40ml/hr, the acid distillation temperature only affects the acid production rate and does not affect the acid production purity. The temperature of the heating element to heat the acid is much lower than the boiling point of the acid, so the phenomenon that the acid vapor entrains impurities to contaminate the high-purity acid will not occur; when the high-purity acid needs to be used, the distillation can be stopped at any time. The cooling method adopts a closed internal circulation return system. The intelligent integrated distillation device does not require an external cooling water source. It is equipped with a compressor cooling + air cooling dual cooling cooling internal circulation system, which is suitable for large-scale work and has a good condensation effect. With anti-suck back function, no need for manual guarding.

Next：How Many Types Of Reactor Jacket?